February 26, 2020
This post is dedicated to the Gimlet. A classic gin cocktail, firm favourite of mine and the inspiration for our 2nd medicinal inspired drink at the recent distillers table session.
Like most origin stories there is always plenty of ‘hear say’ and differing of options, but here are the 3 main stages of the drinks creation as I believe it.

SCURVY
Scurvy is a disease resulting from a deficiency of vitamin C. Initially it presents with fatigue, spots on the skin and bleeding and as it advances, there can be yellow skin, fever and finally death...
It was at one time it was common among sailors and others aboard ships who were at sea longer than fruit and vegetables could be stored (they lived on salted meats and dried grains). It was one of the major limiting factors of marine travel, often killing large numbers of the passengers and crew on long-distance voyages. Between 1500 and 1800, it has been estimated that scurvy killed at least two million sailors!
In 1740, citrus juice (usually lemon or lime) was added to the traditional daily ration of watered-down rum known as grog, to hide the water’s disgusting taste. Although they didn’t know the reason at the time, these sailors were healthier than the rest of the navy because of the daily dose of vitamin C they received.
Throughout this period sailors and naval surgeons were increasingly convinced that citrus fruit could cure scurvy, but the classically trained physicians who ran the medical establishment dismissed this as mere anecdote as it didn’t conform to the current theories of the disease.
Then in March 1795, came some astonishing news. A ship fully supplied with lemon juice had arrived in India after a four-month voyage without a trace of scurvy and with a crew that was healthier than when they set out. It was the proof the medics needed and the effect was almost immediate. Fleet commanders clamored to be supplied with lemon juice and by June the Admiralty acknowledged the demand and agreed that lemon juice should be issued as a daily ration to the crews of all warships.
It took a few years before the method of distribution had been perfected and the supply of the huge quantities required had been secured. But by 1800, the system was in place and fully functioning. This led to remarkable health improvements among the sailors and is consequently believed to have played a critical part in gaining the advantage against enemies who had yet to introduce the measures. 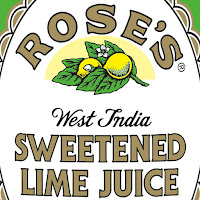 ROSES LIME JUICE CORDIAL
In 1867 Lauchlin Rose patented a method to preserve citrus juice without alcohol, creating a concentrated drink known as Rose’s lime juice cordial. In the same year the ‘Merchant Shipping Act’ was established, requiring all ships of the Royal Navy and Merchant Navy to provide a daily citrus ration to sailors to prevent scurvy. The product became intrinsically linked, creating the nickname “limey”, first for British sailors, then for English immigrants within the former British colonies, and finally, in old American slang, all British people.
West Indian limes had replaced lemons at this point because they were more easily obtained from Britain’s Caribbean colonies and were believed to be more effective because they were more acidic. It was the acid, not the (then-unknown) Vitamin C that they believed was the cure to scurvy.

GIMLET
Rear-Admiral Sir Thomas Desmond Gimlette (served 1879 – 1913) is cited by some as the namesake of this drink. Acting as a doctor to his shipmates it is alleged, that he administered gin with the lime juice in order to mask the sour taste and help them swallow the lime ‘anti-scurvy medication’. The British sailors, though – unlike their superior Naval officers – only had rum rations until this point. Seeing this an opportunity to improve their alcohol ration, they demanded extra Plymouth dry gin to be shipped on for them as well, or they would refuse the lime medication.
(Alternatively some believe the cocktail may have been named after a small hand-held drill of the same name. Used for boring holes, and would have been used on Royal Navy ships around this time.)
The cocktail was featured in Harry Craddock’s famous, 1930 ‘The Savoy Cocktail Book’, where he offered the advice that the drink “can be iced if desired.” But the Gimlet rose to major popularity across British society after it was mentioned in the 1953 Raymond Chandler novel ‘The Long Goodbye’. The main character, Marlowe, said, “A real gimlet is half gin and half Rose’s Lime Juice and nothing else.”

August 19, 2020
We are on the look out for the right person to come and join our distillery family. We have a new position available for a distillery apprentice. The position involves working with the teams at both of our distilleries, learning on the job as well as through external accredited courses in distillation. There is no experience necessary, but there are a few attributes that will certainly come in handy. Attention to detail, computer literacy, an interest in science, a driving license and a good head for numbers would all certainly help. However the most important things we are looking for are a desire to learn and a passion for flavour. The role is based on 30 hours a week of work and 10 hours a week of independent learning leading to internationally recognised qualifications. We are a living wage employer, we have some great perks and we pride ourselves in being a good employer. We will genuinely consider all applicants. If you're interested, then email a C.V. along with a cover l
Read more 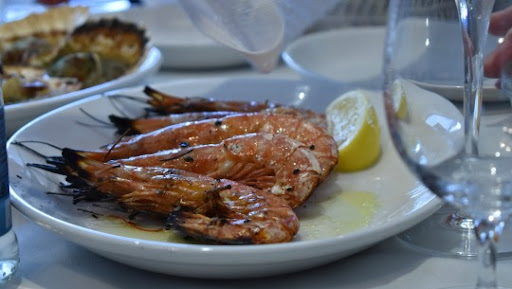 Lunch at the Spiny lobster was truly delicious and we’d strongly recommend a visit next time you have a craving for seafood. We were welcomed by the lovely F.O.H staff and settled at our table in the middle of a busy Tuesday service. To say we were spoilt for choice was an under statement, but luckily for us we had David, Emma and Charlie on hand to make the tough decisions of ‘what to order’ for us. To start, always my favourite, roasted scallops with garlic butter (which tasted just as good as you are imagining), the largest fresh prawns I’ve seen in a long time served simply with olive oil and sea salt, then crisp fried cuttlefish and aioli. A whole Grey mullet and a John dory followed with polenta chips, mustard greens and the house special mashed peas (these really are a must order, so simple but the tastiest peas I’ve ever eaten); the charcoal Josper grill really does cook the fish to perfection. It was a real treat and lovely to enjoy a spiny gin and tonic in i
Read more

THE BRISTOL MINCE PIE OFF 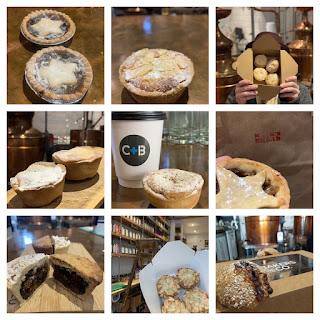 We love mince pies, and we religiously eat them all through December at the distillery. We make it our mission to try mince pies from as many awesome Bristol independents as we can. This year we decided to take it a little more seriously and try to taste them all, it has been a tough job but someone had to do it. Here is a rundown of how things went, along with some of of our favorites.    The Pies we tried: The Bristol Loaf, Farro, Pearly King, East Bristol Bakery, Assembly bakery, Harts, Forrest Bakery (from Coffee & Beer), Pinkmans (from 25a Old Market), Marks bread, Bakers & Co, AhhToots, Brockley Stores. And here is what we thought: We are going to preface this with a note that all of these mince pies were awesome, we are not comparing supermarket pies here, the list is all thriller and no filler (or is that all thrilling with great filling) and you should go and eat all of them!  The Bristol Loaf - A real solid classic, nice chunky pastry, and quite a chunky size, good
Read more